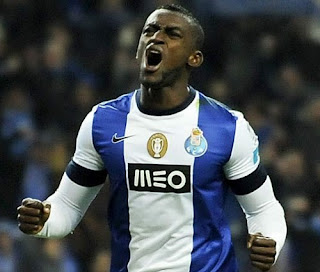 Valencia CF are interested in Porto's striker Jackson Martinez, if you remember he was linked heavily with Valencia CF last summer as well, but ultimately the club decided that his asking price was too much for him at that time and settled for Negredo who came in for 25 million euros.

Jackson Martinez is the club's and league's top goal scorer with 21 goals in the Portuguese league, which has attracted interest from other clubs as well, namely Arsenal, Atletico Madrid and Liverpool.

Jackson Martinez is represented by super agent Jorge Mendes who is very close friends with Valencia's owner Peter Lim and the club has already done several deals with the agent's players. So it only makes sense that Jackson Martinez finds himself as one of the potential reinforcements for Valencia CF.
Posted by SlickR at 7:18 AM
Email ThisBlogThis!Share to TwitterShare to FacebookShare to Pinterest
Labels: news, transfer speculations
Newer Post Older Post Home