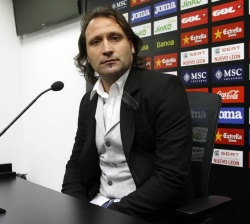 Valencia CF sporting director Francisco Rufete announced at a Spanish radio station that Valencia CF could invest up to 50 million in summer reinforcements if the club qualified for the Champions League.

He reiterated how important it is to qualify for the Champions League and that doing so would give Valencia CF significant boost of money, allowing them to stay within fair play rules and still invest 50 million in new players if there is a need.

As you all know with Peter Lim at the helm the club can easily invest 50 million euros and more to bring in new reinforcement, but the issue becomes the Uefa fair play rules and Valencia CF has to stay within them. Peter Lim also wants the club to be profitable and turn out a net positive each year.
Posted by SlickR at 11:31 AM
Email ThisBlogThis!Share to TwitterShare to FacebookShare to Pinterest
Labels: news
Newer Post Older Post Home