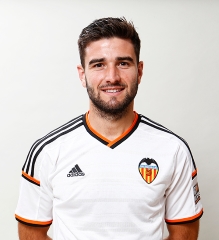 Italian football club Inter Milan is supposedly interested in Valencia CF right back Antonio Barragan. Inter have strengthened significantly in the winter transfer market, but their coach Roberto Mancini feels like he need more defensive reinforcements, especially attacking full backs since Inter have often played with 5 players at the back or 3 central defenders and 2 full backs, depending how you see the formation.

Antonio Barragan has extended his contract till 2017, but the player has a low release clause and its possible the team could sell him if the offer is in the region of 6 million euros.

He's been a solid performer this season, previous seasons he's been inconsistent, but under new coach Nuno Espirito Santo he's been performing at a solid level. I know some readers of this blog would like to see him replaced and this could be it, though it will be hard to find a suitable replacement, the market doesn't have too many good, reliable right backs.
Posted by SlickR at 6:11 AM
Email ThisBlogThis!Share to TwitterShare to FacebookShare to Pinterest
Labels: news, transfer speculations
Newer Post Older Post Home