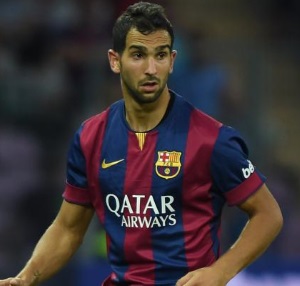 Valencia CF and Antonio Barragan are trying to reach an agreement over a new contract deal which would have him extend his stay in Valencia CF till 2020. Antonio Barragan current contract expires in this summer and he is one of the weakest paid players, but under Nuno Santos he is first choice and in his new contract his salary would be significantly improved.
However the contract negotiations are going really slowly and at this point its uncertain if a deal would be reaches so Valencia CF is starting to look at a number of right backs as possibly replacements for Barragan should contract negotations fail.

One of the players Valencia CF are interested in is Martin Montoya the right back from Barcelona FC. He hasn't been featured much under Louis Enrique and is looking for a club where he could have more minutes in. Martin Montoya is a product of Barcelona's youth system and he came in through the ranks from Barcelona youth teams to Barcelona B and eventually to Barcelona first team. He's featured 39 times for Barcelona FC in over 4 years, but he's never managed to win a first place spot.

Valencia CF is interested in him as he will come in relatively cheap and the fact that he is still very young at 23 years old is very positive as the club is looking to build a team for the future. He is also one of the few available right back and wouldn't mind transferring to Valencia CF due to his lack of playing time in Barcelona.
Posted by SlickR at 7:20 PM
Email ThisBlogThis!Share to TwitterShare to FacebookShare to Pinterest
Labels: transfer speculations
Newer Post Older Post Home