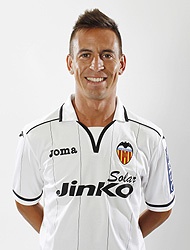 Its official, Joao Pereira and Valencia CF have mutually agreed to terminate his contract. As of today Joao Pereira is a free agent and free to join any club he wants.

I think this is a good move for Joao Pereira as he needs playing time and he's been left out by the coach for 6 months, on the other hand Valencia CF looses out on few million euros on his sale, but at the end of the day it helps him to to a new club in Hannover 96.

There were reports that Arsenal and Benfica were interested in the player, but I guess Hannover 96 had the best offer for him.