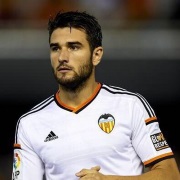 Antonio Barragan has accepted Valencia CF new contract and it is now just a formality that needs to be officially announced.

The club and Barragan had long contract negotiations and at times it seemed as the negotiations would break down and no deal can be reached, but he's accepted Valencia's latest contract proposal and will be extending his stay in Valencia CF.

Valencia CF were also looking at other right back for the potential Barragan exit, but realistically speaking it would have been foolish of him to leave Valencia CF, especially at this time when its becoming a great, formidable club once again with Peter Lim's ownership.
Posted by SlickR at 8:02 AM
Email ThisBlogThis!Share to TwitterShare to FacebookShare to Pinterest
Labels: news
Newer Post Older Post Home