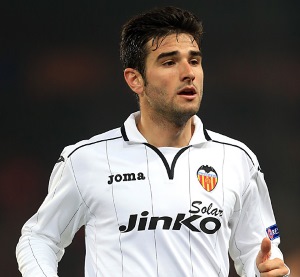 Antonio Barragan's current contract runs until June 2015 and he is one of the few players that has such a short contract left. Reports earlier in the year suggested that he might leave and that he was looking at other clubs, but since this new season he has been a regular starter for Valencia CF and the player is content in the club, with the only existing issue is his ending contract.

Now it seems as Valencia CF will be offering his a new and improved contract to reflect his position at the team in the moment, I believe in his current contract he earns little bit less than 1 million euros, and with the new contract he is going to earn 1 million euros and a bit more, depending on the details of the negotiation.

The club is obviously going to continue with their way of doing business, now that Peter Lim is the owner won't change that and the club is looking at having small profits at the end of the year. The big money from Lim is going to be spent on transfers and right now Enzo Perez is said to be almost certainly coming to Valencia CF for 25 million euros this winter.
Posted by SlickR at 1:34 AM
Email ThisBlogThis!Share to TwitterShare to FacebookShare to Pinterest
Labels: news
Newer Post Older Post Home