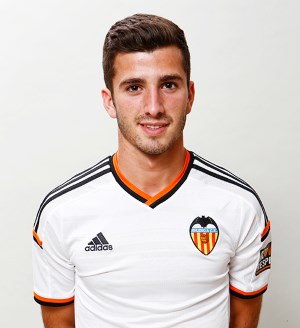 Arsenal are also monitoring Gaya and could try to acquire him as they've been having a lot of defensive issues, Arsene Wenger is also a fan of young talented players, always looking for the next big talent and Arsenal sure have the big money to lure him in, with the Premier League players being the most paid in the world and their transfer fees are one of the highest as well, so shelling out 20 million or more won't be a problem for them.

Manchester City are also potentially interested with Pellegrini also a known coach for finding and developing young talents and he knows the Spanish players as the back of his hand. Manchester City also have agreement for 25 million euros and more for the transfer fee of Alvaro Negredo and they would be willing to significantly lower the fee if Gaya was to move the other way.

There are several clubs also interested in Paco Alcacer, among them Chelsea, Arsenal and few more.

The club is currently working on contract extensions for both players, but its unclear how long until we see their contracts extended.
Posted by SlickR at 4:53 PM
Email ThisBlogThis!Share to TwitterShare to FacebookShare to Pinterest
Labels: news, transfer speculations
Newer Post Older Post Home