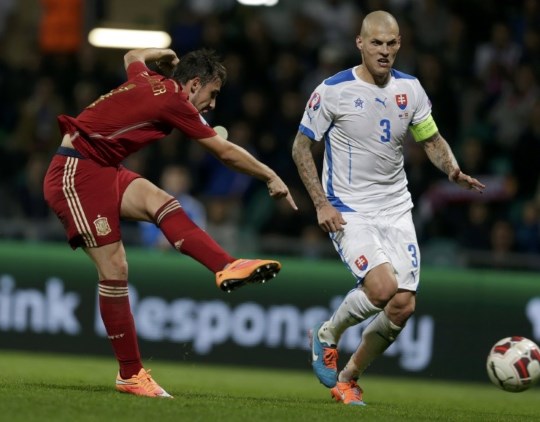 Valencia CF striker Paco Alcacer shone for Spain this weekend, scoring two goals in the two European qualifier matches and has scored a total of 3 goals from 3 matches.

In the first qualifying match for Spain against Slovakia Paco Alcacer entered the game as a sub, with the Spaining team losing and Del Bosque was looking for an equalizer. Paco delivered just that, minutes after coming on he scored a goal to equalize the result against Slovakia, unfortunately Spain would go to lose that match despite Paco's goal.

Having proven so effective for Spain and in top form for club as well, Del Bosque decided to start with two strikers in the match against Luxemburg. Paco instantly had a good chance early in the match, but could only shoot by the side of the goal, though he soon go on to score after an assist by Silva.

It was a real good goal, receiving the pass from Silva, shielding himself from opposition and turning around and releasing a powerful shot that Luxemburg goalkeeper had no chance to save.

Rodrigo Moreno had his debut for Spain against Luxembug and he went on to assist the goal for Juan Bernat, a former Valencia CF player.

So overall great showing for Moreno and Paco, though Andre Gomes had a weaker showing for Portugal, and being replaced on half time, though his replacement wasn't any better either, so Gomes still has chance to become a regular for Portugal.

Feghouli also featured for Algeria in their 2-0 victory over Malawi, scoring a goal, only to be ruled offside.

Otamendi didn't start for Argentina even though he has been in top form for Valencia CF and Argentina went on to lose 2-0 to Brasil, so maybe next match he would start.
Posted by SlickR at 10:58 AM
Email ThisBlogThis!Share to TwitterShare to FacebookShare to Pinterest
Labels: news
Newer Post Older Post Home