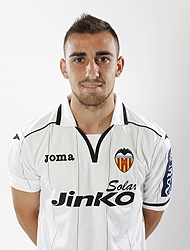 English Premier league club Arsenal is interested in bringing Paco Alcacer to their ranks, their manager Arsene Wenger is known for finding and bringing young talents to the club and developing them into great players and he's set his eyes on Valencia's Paco Alcacer.

Paco Alcacer had a great debutante season, scoring over 15 goals in all competitions in just half a season, since that is when he was given a chance by Valencia's former coach Pizzi. He has also started this season on a positive note, as well as scoring in his debut for the Spanish national team against Macedonia.

Suffice to say he is seen as one of the best talents in the world and with his current buyout clause at only 20 million euros he is seen as a bargain.

Fortunately though Valencia CF is working on a new contract for Paco that would keep him in Valencia CF till 2019 and even more importantly raise his buyout clause over 50 million euros.
Posted by SlickR at 8:19 AM
Email ThisBlogThis!Share to TwitterShare to FacebookShare to Pinterest
Labels: news, transfer speculations
Newer Post Older Post Home