While this wasn't a focus at the beginning of the transfer window, it has now become one of the areas to explore. When Alves renewed his contract, it was seen as a statement of intent from the club declaring the first choice goalkeeper. It ended the debate on who is better to cover this position. We knew one of them has to go and it appears Guaita is now on the exit door.

There was interest at the beginning of the window from Spanish clubs Real Sociedad (to replace Bravo), Sevilla (to compete with Beto) and Getafe (to replace Moya). Both Sociedad and Sevilla have already signed new keepers so the interest has faded. Getafe is the only one that remains. As such, Guaita thought about staying and settling for the fact that he has to compete with Diego Alves. The friendly game against Alianza Lima, made him think otherwise. With Diego Alves injured in the first half, Jaume was chosen as a replacement over Guaita which made it seem as if Guaita has fallen down further to third place in the pecking order. 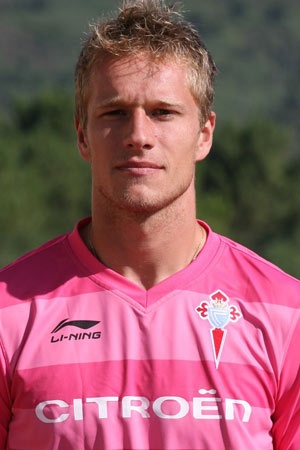 Guaita's only option now is Getafe which is involved in the same number of competitions as Valencia CF next season, only La Liga and Copa del Rey but it would guarantee his playing time. The problem is that Getafe aren't willing to pay the demand of Valencia CF for Guaita and the player has reportedly urged the club to lower the asking price. The deal in negotiation now sees Valencia CF terminate his contract, as it did with Costa, but Guaita has to forgive his the amount Valencia CF has to pay to break the contract.

Valencia CF have already lined-up a replacement (pretty quick) in 26 year old Celta de Vigo goalkeeper Yoel Rodriguez. In fact, Valencia CF has already submitted an offer, which further indicates Guaita is on his way out. With this Valencia CF would have a third goalkeeper to compete with Alves and Jaume. While Yoel is praised to be quite good, he is another keeper who is in his prime, the same as with Guaita which could cause problems later.

Valencia CF have reached an agreement with the player for the next four seasons. The price will be about 2 million euros but Valencia CF is still negotiating with Celta Vigo. The club hopes to announce the signing before the team returns to Valencia from Chile (for the friendly game tomorrow).

Any thought on Yoel Rodriguez? Good enough replacement or not? Any thoughts on the goalkeeping situation in general?
Posted by Amunt.Valencia at 8:12 PM
Email ThisBlogThis!Share to TwitterShare to FacebookShare to Pinterest
Labels: squad, transfer speculations
Newer Post Older Post Home