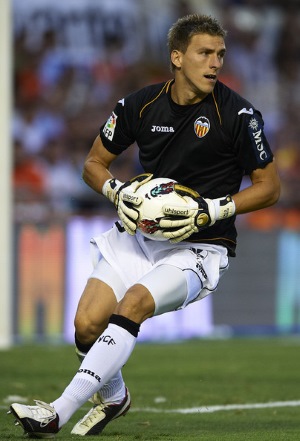 Valencia CF made it official today that Guaita will transfer to Getafe for free. Guaita was one of the players who came up from the Mestalla B team into the first team. He was also one of the captains of the side (all three are now gone, Mathieu, Costa and Guaita).

Guaita did very well when he first came into the team and could've very well been a huge success. He was even said to be capable of being called up for the Spanish national team. All that changed when Diego Alves gave him something to think about. Alves fought with Guaita for the spot and came out victorious. Instead of fighting back to earn the spot, Guaita simply complained. That attitude could very well be what cost him a place in Nuno's team. Meanwhile, Nuno chose to count on Jaume and bring in Yoel Rodriguez from Celta, leaving no room for the sulking Guaita.

Now, the deal is in fact for free, however Valencia CF retained some economic rights meaning they will take a portion of any future transfer. In addition, Valencia CF also insisted and got a right of first refusal option, meaning the player will be offered to Valencia CF first should another team want to purchase him from Getafe. This way Guaita gets his playing time and if he recovers the fantastic form he was on, Valencia CF can still get him back.