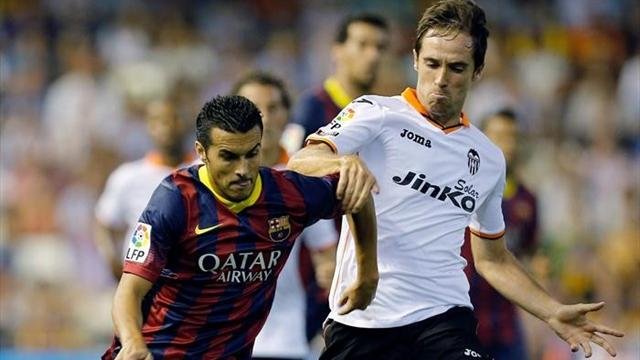 Michel Herrero hasn't had a good time at Valencia CF, ever since he was promoted from the youth team he hasn't experienced good times at Valencia CF, so he spent 2 years loaned out and then sold to Levante where he finally impressed the club with his performances and the club activated his buy-back clause. But it wasn't to be, as the first coach Djukic and later Pizzi barely used him and he was relegated seating on the bench or not even selected for the squad.

Time has now come for Michel to basically move on, so he joins Getafe on a 2 year loan deal, by the end of it he would become a free agent as his contract with Valencia CF expires in July 2016.

After the arrival of Gomes from Benfica he has been deemed surplus to requirements and new coach Nuno hasn't been too impressed him, but there also needs to be space created for at least 3 more new players arriving at Valencia CF.

Jeremy Mathieu is also on the exit door, he will likely be leaving for Barcelona as they look ready to pay out his 20 million release clause. Ricardo Costa has also rescinded his contract with Valencia CF, so he is a free agent, and this means Valencia CF are going to be looking for a new central defender, as the club is left with only 3 right now in Victor Ruiz, Nicolas Otamendi and Ruben Vezo.
Posted by SlickR at 4:21 PM
Email ThisBlogThis!Share to TwitterShare to FacebookShare to Pinterest
Labels: news, official transfers
Newer Post Older Post Home