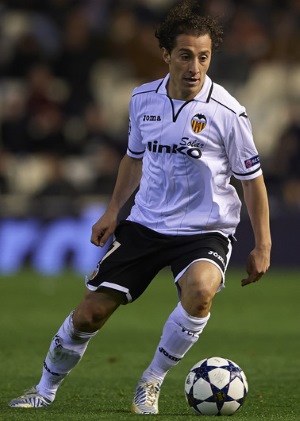 Premier League club Everton is reportedly interested in signing Andres Guardado. Everton manager Roberto Martinez is said to be a big fan of the player and he wants him. They are currently preparing a bid for the Mexican winger.

We have yet to see much of Guardado in the pre-season so I am a bit reluctant about selling him. We did see him last game against Universidad Catolica, but it was in midfield not at his natural wing position.

If we do go ahead with this sale anyway, we should make some good money considering the good performance put in by Guardado in the World Cup. If he leaves, it has to be for good money otherwise I'm against it. That is the deciding factor along with his role in Nuno's plans.

So far it seems like the left wing spot will go to Piatti judging by preseason performances thus far. If Guardado leaves, it might free up room for someone like Viera to break into the team.

Any thoughts on Guardado? Sell him or not?
Posted by Amunt.Valencia at 10:09 PM
Email ThisBlogThis!Share to TwitterShare to FacebookShare to Pinterest
Labels: news, transfer speculations
Newer Post Older Post Home