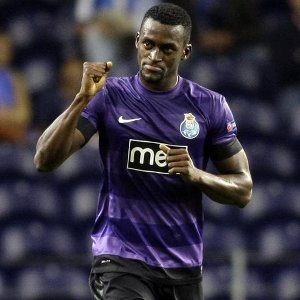 Valencia CF are trying to buy Jackson Martínez from Porto and the club is seriously trying to acquire the player. With Peter's Lim 60 million euros on summer transfers the club has a free hand to strongly go after the players it wants.

Reports have it that Valencia CF sent an offer of 30+ million euros, though I really doubt the offer was that high and chances are Spanish media are exaggerating. Even though Valencia CF has 60 million on transfers for the summer, I seriously doubt they are going to spend 30 million on 1 player that isn't even that good.

Playing for Porto in the Portugal league is quite lower level than the Spanish Primera division and Porto is way stronger than their competition as well, so anyone can be scoring enough goals there.

Personally I wouldn't be happy if we got Jackson Martínez and I don't think his play style fits with Valencia CF and I really don't think he is very good, not at 30 million euros.
Posted by SlickR at 4:43 PM
Email ThisBlogThis!Share to TwitterShare to FacebookShare to Pinterest
Labels: news, transfer speculations
Newer Post Older Post Home