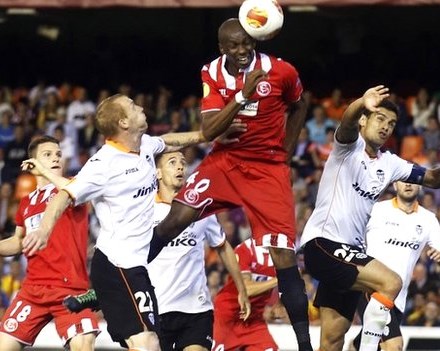 Yesterday's game against Sevilla FC was a very exciting one, we saw a very exciting Valencia CF that was confident, determined, motivated and played great football, leading to an early 2-0 lead over Sevilla FC and then leading 3-0 in the second half, with a tragic, but constantly recurring mistake in defense allowing Sevilla FC to score a goal and go to the Europa League finals on a goal difference.

I couldn't even be angry at Mathieu and the team yesterday after an overall good showing and playing football, having the intensity and determination to win and beat Sevilla FC, I was kind of amused actually, since I saw the fans on the stadium celebrating as if the team had already won and bam in the last seconds Sevilla FC scores and shattered the dreams. That is what you get when celebrating early. Take notice!

I can help but blame Pizzi as well, he took out our best player on the field Parejo who made the midfield, who gave us the possession and replaced him with Javi Guego who can't pass or control the midfield if his file depended on it. Of course as soon as Parejo left Sevilla FC took control of the match, dominated the midfield and started attacking, Emery threw everything on one card in attack and it payed off.

I could understand removing Parejo if we had a similar type player who can keep possession and control the midfield, but we don't. Ever Banega is out on loan, struggling even in Argentina, so probably wouldn't have been helpful even if he was here to replace Parejo.

At least next year we'll have it all for rebuilding, the team won't be distracted with European football and Pizzi can concentrate on building a competitive team that can finish top 4 and qualify for the Champions League.

I look at Atletico Madrid and wish we have a similar situation where next year Valencia CF develops and grows and is then able to play at the highest levels in 2-3 years and hopefully stay there.

I've made peace long ago with the fact that this season is lost and that hoping for something out of nothing is pointless and counter productive, I'd rather be surprised rather than majorly disappointing and so I kept my expectations low, so Valencia CF even reaching the semi finals in the Europa League was a surprise, heck even scoring 3 goals yesterday was a big surprise, I thought we'd lose something like 4-1 on aggregate, so even coming close to the finals was a huge surprise.

Facts are this team is inconsistent, is disjointed, doesn't have a core and is emotionally all over the place. We need a solid team building campaign next season to create a good, strong and competitive team. We have the youngsters, we also have some more experienced players, though we do need reinforcements in their prime at 25 to 27 years of age who will compliment and add to this team.
Posted by SlickR at 11:16 AM
Email ThisBlogThis!Share to TwitterShare to FacebookShare to Pinterest
Labels: news
Newer Post Older Post Home