Carles Gil to play for Valencia CF next season 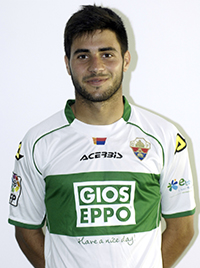 Valencia CF player Carles Gil who is currently on loan to Elche will be playing for Valencia CF next season, confirmed his agent.

As you all know this means Aly Cissokho won't be coming back to Valencia CF, that is now pretty much 100% sure. There is just no room for 3 left backs and that means Aly Cissokho is most definately going to be sold in the summer.

Aly Cissokho is currently on loan to Liverpool, but between injuries, lack of fitness and some not so good performances he's dropped in the pecking order there and Liverpool won't be purchasing him from Valencia CF.

It is clear that next season Juan Bernat will continue to be the starter on the left back position, with Carles Gil being replacement for him, probably to get some chances in the Spanish cup and when Bernat is injured and/or unfit.

Tell me what you think about these recent happening and do you think Aly Cissokho should be sold, what do you think about Banega and Pabon leaving and what are your thought on some of our transfers?
Posted by SlickR at 1:46 AM
Email ThisBlogThis!Share to TwitterShare to FacebookShare to Pinterest
Labels: news
Newer Post Older Post Home