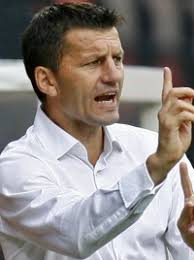 Well, it's been coming for a while now. Valencia has been struggling against opposition in every competition and the match against Atletico Madrid was the last straw for the Valencia management.

Despite announcing that he supports Djukic completely and insisting that he will stay till the end of the season, President Salvo announced the dismissal of Djukic today. Djukic has really failed to live up to what was expected of him. He leaves Valencia sitting at 9th in the table with 20 points and managed 6 wins, 2 draws and 8 losses from the 16 league games he has been in charge. While the loss against Atletico was expected, it demonstrated that Valencia cannot compete with its rivals anymore and that they don't seem to be improving. Anyone who watched the previous couple of games in all competitions will tell you that there is no sense of direction when Valencia play and you just feel like the potential of this squad isn't being utilized.

Anyways, the management have also announced that Valencia B coach, Nico Estevez will take over as interim manager. This will be Valencia's 5th change in managers in the past two years (Emery, Pellegrino, Valverde, and the sacked Djukic).

Now the issue remains on who will take over after Estevez. Andre Villas Boas recently become available after Tottenham lost 0-5 to Liverpool. There is also Roberto Di Matteo whom Valencia were linked with last year before signing Valverde. I prefer the latter.

Please feel free to let us know how you feel about Djukic's firing and who YOU think should be next coach and why.
AMUNT VALENCIA!!!