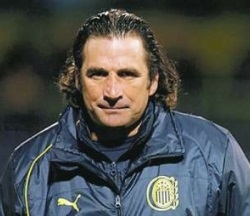 This has been a roller coaster ride as Pizzi first rejected Valencia CF as he was keep on continuing with San Lorenzo and seeing his contract out, but supposedly our new sporting director Ayala talked to Pizzi and convinced him to come to Valencia CF.

The news was confirmed by his agent Ricardo Slipper who said that Pizzi got a good offer from Valencia CF and decided to accept it.

So there you have it, Valencia CF new coach Juan Antonio Pizzi. Hopefully it will all work out and he'd be able to achieve success with Valencia CF. I'm rooting for him, because I'm rooting for Valencia CF and want the team to achieve Champions League spot, at the very least Europa League spot, but I'm hoping and targeting Champions League, even though I know its going to be very hard and I know things won't magically change, its still the same squad, the same problems are still there and it will be hard work and different work than Djukic did that can get the team on the right track.

What do you think about this? Good choice, bad choice, unsure, tell us in the comments!
Posted by SlickR at 5:25 AM
Email ThisBlogThis!Share to TwitterShare to FacebookShare to Pinterest
Labels: news
Newer Post Older Post Home