Valencia CF managed to get their first win the the Europa League against their Russian opponent Kuban Krasnodar by 2-0. Kuban Krasnodar is a newcomer to the Russian Premier league and hasn't opened the season very good so the expectations were that Valencia CF is and must win this game. 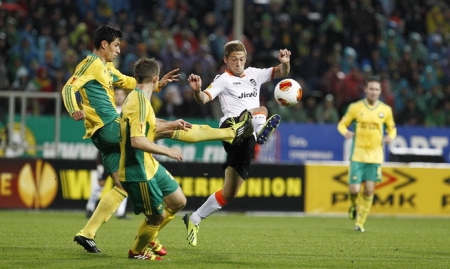 Whilst Valencia won, it wasn't all that convincing win. In fact Valencia struggled for most of the match and it was only after Kuban Krasnodar silly goalkeeper mistake that Paco managed to score and bring Valencia CF a lead of one goal. After that the Russians tried to push forward and win, but Feghouli put an end to their hopes with a brilliantly taken free kick.

Overall it wasn't a convincing win, the wing play was almost non existent and the team really started playing after Fede came in in place for Canales and caused some problems with his pace and trickery. Paco also had an impact with his goal, but also good positioning and desire to run, so he was in a position to punish the goalkeeper's mistake.

By the end Djukic brought in Romney in place of Parejo to close out the game and this time he showed a more stable play, although it was against a significantly weaker opponent and when the end was towards the end. Anyways impressive displays from Fede, Paco scored a goal which will be good for his confidence and the defense has been solid, even with Mathieu out and R. Costa partnering Ruiz for the first time in a long time.

Player Ratings:
Guaita 6 - Didn't have much work, whatever came towards him he was secure.
Barragan 5 - Not the most influential of matches, was good in defense and a bit lacking when going forward.
R. Costa 6.5 - Made several interventions and blocked few shots, bailed out Ruiz on one or two occasions too.
Ruiz 6 - Somewhat weaker performance compared to R. Costa, but did enough to stop Kuban Krasnodar attackers and keep a clean sheet.
Guardado 5 - Decent at the back, but failed to contribute much going forward.
Fuego 6 - Good solid display at the center of the park, broke up few play and was generally useful in defense.
Parejo 5.5 - Good performance, but nothing special. He was more accurate with his passing and didn't make any significant mistakes.
Feghouli 6 - Scored a goal with a brilliant free kick, but was otherwise invisible and didn't contribute anything.
Canales 5 - I've always considered him a big talent with a huge potential, but its getting clearer and clearer that after all his injuries he just doesn't have it anymore. Average performance with nothing to stand out.
Bernat 5- Quite anonymous performance by Bernat who really failed to threaten Kuban at all. Tracked back nicely though and helped out in defense.
Piatti 5.5 - Showed off his pace a few times and found himself in semi decent situations, but was unable to make the most of it. Largely covered and prevented from scoring.
Subs:
Fede 6 - Didn't have too much time, but with his coming on the game changed and he did cause problems for Kuban with his pace and trickery. Had one good shot towards goal from the right side.
Paco 6 - Came in and scored a goal shorty after, so he will be happy with that and deserves more playing time and to start these type of matches.
Romeu N/A - not enough time.
Posted by SlickR at 1:24 PM
Email ThisBlogThis!Share to TwitterShare to FacebookShare to Pinterest
Labels: match report
Newer Post Older Post Home