Djukic has given all the players a chance to show off their skills and prove themselves worthy. We have seen the new players, Romeu, Fuego, Michel and Postiga, in action. We have also observed the youngsters - Fede, Bernat, Ibanez and Alcacer. Some players were tested in different positions like Bernat (LB and LW), Mathieu (LB and CB), Viera (LW, CAM) and Jonas (LW, CAM) to name a few. The debate for who the starting goalkeeper should be has also been reopened as both goalkeepers impressed in the pre-season fixtures. Now, Djukic has a big decision in establishing the first team for Valencia CF. We will see what his pre-season experiments lead to in the match against Malaga.

Based on the matches I've seen this what I think the starting line-up should be: 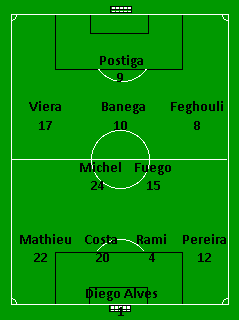