As Soldado was waiting for his plane to arrive to take him to England where he will play for Tottenham, he gave an interview which I found interesting. In this interview, Soldado explains vaguely why he left the club. After thanking everyone (fans, teammates, the club, staff) and wishing them luck Soldado said the following:

"The reason for my departure is that I do not trust the project. The president has said many lies, to me personally by phone the times I talked to him. I think there should be normalcy and stability and I have not had. "

Soldado then called the club president, Salvo, a liar and blasted him for "leaking information". Soldado continues by saying:

"You have published many things. I think it is your fault because you leaked it and that has done much harm to me, my agent, my family ...I'm hurt that you could have done everything as clearly as possible, with sincerity, and he has not told the truth in many things. "

Finally Soldado surprisingly says that he did not want to leave by saying:

"Every time I said I wanted to stay at Valencia I've said so because I believed it at the time, but in football things change from one day to another. I apologize because I committed to fulfill my contract on many occasions but on the way I have crossed a stone (Salvo) in which I do not believe, as you do not believe in something it's best to stay away if possible. " 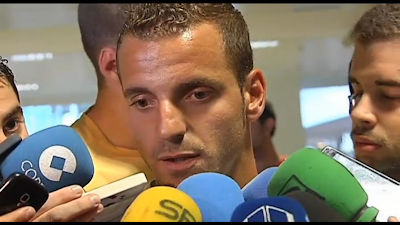 The club immediately hit back and said that Soldado was upset because the transfer was made more difficult than it should've been but they felt like they were entitled to keep their best player. This doesn't address any of the accusations. The president was not available for response though.

As to the specific reason, Soldado said:

"I will not give specific reasons why I'm hurt because no benefit. I do not want to hurt anybody. " Then, however, he added: "I hope I'm wrong and this president will mark an epoch and is the one that wins titles with Valencia, I have to wish good luck to him and to valencianismo because together is very strong and I and my family are going to have this club in my heart. "

So, if you want to blame anyone for Soldado's departure, its the president, according to Soldado. I tried to dig up a specific reason but it could have something to do with a court case Soldado was involved in recently, I'm not too sure though. Anyway, I was quite upset while reading this news. To think that our best player lost faith and left because of the president. It really is a shame.