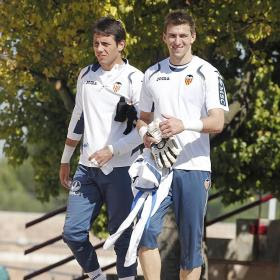 As mentioned several times before, our club is blessed with two great goalkeepers and the there was a long-standing debate on who should start between the two, Diego Alves or Guaita. When the new coach took over, he tested both keepers and chose Diego Alves as the first team keeper as was seen against Malaga. A few days ago, Guaita expressed he would like to renew for Valencia and would fight for his spot. Now reports have come in that he left the Malaga match angry due to his role as a substitute. He has now reportedly refused to renew. Arsenal are looking to capitalize on that and according to Superdeporte have sent an agent to Valencia to discuss the goalkeeper. This happens however, a short while before the transfer deadline of August 31st. If the transfer does go through, we'll be left with one goalkeeper with little time or budget to get a solid replacement. The replacement will therefore be of a much lower skill level than Guaita whether he is bought or promoted from the Mestalla B team. Valencia's position is that they do not want to sell except if an "irresistible" offer was to come in. Most reports say that Valencia will only sell for his buyout clause (about 30 million).

From what I have seen in the pre-season, Diego Alves deservedly got picked as the first-team keeper. He has impressed more in my opinion. However, if Guaita does move he will have to compete with two other keepers, Szczesny and Fabianski. As such, even though Arsenal will compete in the Champions League, the transfer does not seem like a good move for Guaita. I don't want Guaita to leave of course. Despite not wanting to have a player who complains all the time and who has lost commitment, he does have many good qualities. When the goalkeeper gets injured at any club, they usually are in trouble since their back-up is of lower quality. However, we don't have to worry about that. Plus, Guaita is a home-grown player thus making him a fan-favorite and is one of the captains of the club. Hopefully, this is just something that can be settled quickly so that the team can focus on their game. After all, between three competitions there is more than enough time for everyone to play.

Feel free to let us know what you think :)
AMUNT VALENCIA!!!
Posted by Amunt.Valencia at 12:54 AM
Email ThisBlogThis!Share to TwitterShare to FacebookShare to Pinterest
Labels: news
Newer Post Older Post Home