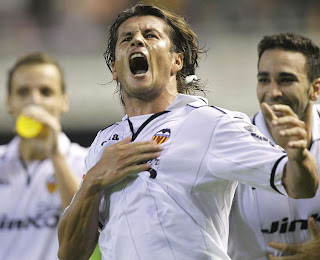 Well, I wrote earlier this week about how he would be on his way out in the next few days and so the day arrives. Nelson Valdez has reached an agreement with Al-Jazeera (UAE club) for a fee of 3 million euros. He will leave the training camp in Germany on Tuesday to travel to the UAE. I'm a bit sad to see him leave so soon, he really came through for us in the short while he was here, scoring last minute goals as a "Super-Sub". He wasn't used much by Valverde and with the return of Paco Alcacer, that will make things even harder for him. Anyways, all the best to the 29 year old Paraguayan striker and thanks for everything.

He was loaned from Rubin Kazan and then purchased in February 2013 for 3 million euros.Nelson Valdez has scored 6 goals in 28 appearances in La Liga for Valencia. He started 6 times and was subbed in 22 times.