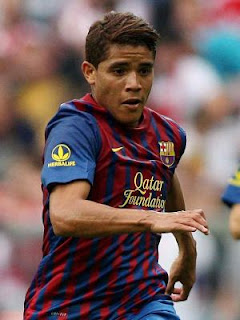 After losing out on Giovani Dos Santos to newly promoted club Villareal, Valencia set their sights on the next best thing, his 23-year old younger brother Jonathan Dos Santos. Also, home-grown in Barcelona's youth academy, JDS plays pretty much everywhere in the center of midfield (unlike his brother who plays on the wings). He currently plays for Barcelona's B-Team and has been eager to move up to the first team with little success.

To be honest, I don't see why we need another central midfielder (we have Canales, Parejo, Michel, Banega, Fuego, Romeu). That's two players per central midfield position. I don't know what the plan is with JDS but Real Sociedad also seems to be after the playmaker's signature. He seems to prefer Real Sociedad so that he can play Champions League football but seeing how close we came to signing his brother, anything can happen.