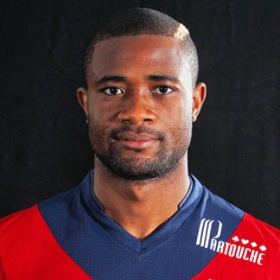 Aurelien Chedjou has played for Lille for 5 years and his current contract lasts until 2016. He is currently valued at around 10 million euros, though with Lille being in a bad situation he could leave for cheaper. The player admitted that he has been in contact with Valencia CF and said he would like to play for Valencia CF.

His lower salary is what has attracted Valencia CF which is at 1.68 million Euros and he would love to play for a bigger club, especially one who constantly plays in the Champions League, though that is still currently just out of reach for Valencia CF, but hopefully it will make it.

There are few more teams interested in his services though and coupled with the high price could put Valencia CF out of the bid to buy him.
Posted by SlickR at 4:07 PM
Email ThisBlogThis!Share to TwitterShare to FacebookShare to Pinterest
Labels: transfer speculations
Newer Post Older Post Home