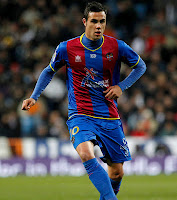 Reports from Spain are coming up that Valencia CF is seriously interested in acquiring Vicente Iborra from city rival Levante that the club is even willing to meet the payout clause.

With David Albelda all but having finished his career at Valencia CF and surely to leave in the summer, the cub officials have already found one defensive midfielder in Javi Fuego who will transfer in the summer to Valencia CF, but the club wants to add one more defensive midfielder and a more quality one so that there are absolutely no problems at that position and Vicente Iborra has been identified as the man for the job.