David Villa back to Valencia CF? 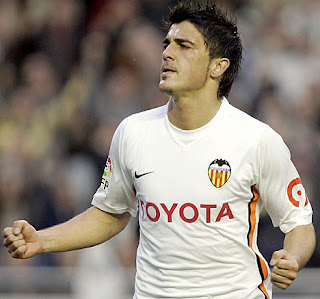 Valencia CF president Manuel Llorente publicly announced few days ago and said its not a secret that he would like to see David Villa back in Valencia CF and that if there is a chance for that he will work towards that goal.

Well there is a big chance that David Villa might return to Valencia as several reports says that he is in bad relationship with Lionel Messi and the new coach Tito Villanova who hasn't been playing Villa much since his return and its said that he is out of favor and second to even Tello and Sanchez.

He is considering leaving Barcelona FC in the summer and Valencia CF could be his potential destination, of course if Juventus don't get in competition of his signature, which depends if they are going to find a new striker in the winter transfer season.

Apart from that David Villa would earn a lot less in Valencia CF than in Barcelona FC and that could be a problem. Llorente sees bringing David Villa to Valencia CF as a good political move so that he can be reelected president and as a perfect replacement for Jonas who is likely to leave in the summer, possibly even in the winter transfer if good offers come for him.
Posted by SlickR at 7:24 AM
Email ThisBlogThis!Share to TwitterShare to FacebookShare to Pinterest
Labels: transfer speculations
Newer Post Older Post Home