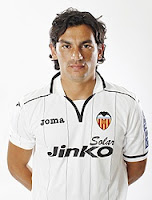 Valencia CF midfielder Alberto Tino Costa has received for the second time a call up to the Argentinian national squad for their friendly match against Saudi Arabia.

Fernando Gago is a standard player for Argentina and has been called again of course. Ever Banega used to feature for Argentina as well, but with his injury he has lost his place and will need to prove himself again, probably in competition now with his clubmate Tino Costa.
Posted by SlickR at 4:50 AM
Email ThisBlogThis!Share to TwitterShare to FacebookShare to Pinterest
Labels: news
Newer Post Older Post Home