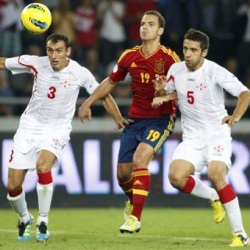 Last night all of the World Cup qualifiers were played and Valencia CF had several players called to their national teams.

Portugal won against Azerbaijan and Joao Pereira stared and played the full 90 minutes in the game. Judging from the ratings he had a poor game once again, just like in the previous game against Luxemburg. I didn't see any of the games, but if that is the case, he needs to improve his game. Ricardo Costa didn't feature.

Diego Alves started once again on goal for Brazil against China and had a good game, albeit with not much work, but he kept a clean sheet twice. Jonas came in as a sun for Neymar and had a fairly decent game, though he clearly lacks understanding with his team mates.

As I reported yesterday Roberto Soldado started for Spain and played for the whole match, scoring the one and only goal for Spain in the 86th minute. He wasn't very noticeable before that, but was always surrounded by defenders and Georgia defended with 10 men.

Adil Rami didn't start for France and as I've told you in the last report about this, he has likely lost his place or at least in the process of doing so. Some not so stellar performance for France in the European Cup, some outright bad performances for Spain and he has found himself warming the bench. He needs to improve his game immensely or he may also be on the way out of Valencia CF as well.

Fernando Gago played about 50 minutes for Argentina and had a good match, but he seemed to be injured when an opposing player fell on his head and he was rushed to the hospital, but it seems the injury is not severe and after a day or two of rest he should be fine.

Andres Guardado started the both matches for Mexico, both of which Mexico won. He also provided an assist in the first match. Wasn't as proficient in the second match.
Posted by SlickR at 1:00 PM
Email ThisBlogThis!Share to TwitterShare to FacebookShare to Pinterest
Labels: news
Newer Post Older Post Home