Valencia CF recorded its first win in the Spanish league against Celta Vigo with a result of 2-1. It was supposed to be a regular and secure victory, but Valencia CF barely escaped with the win.

Valencia CF coach Mauricio Pellegrino had some troubles in choosing the squad for this match as few players were injured, few were returning from their national teams where they played and there was a lack of a defensive midfielder. Knowing what happened last time when Parejo and Tino Costa played it was a risk to pair them both again, but the only alternative being Portu from the B team, Mauricio Pellegrino decided to field Parejo and Tino Costa at the midfield. He also gave Joao Pereira and Andres Guardado rests, while he retained Soldado and Jonas in attack and the pair of Rami and Ruiz at the back, with Jonathan Viera starting on the right wing. 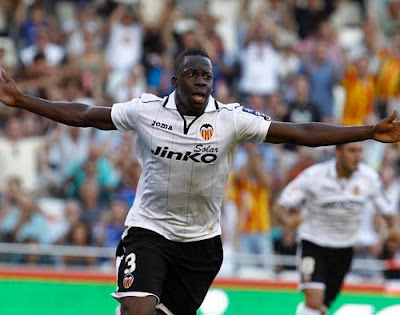 The flanks though were much more dangerous this time around and Viera almost immediately showed his talents by providing a great assist to Feghuoli who scored the first goal. I've said it many times, but I'll say it again Viera is pure raw talent with great vision and instincts. Feghuoli also showed good composure in front of goal and unlike in some of the previous matches was dead accurate this time around.

Celta Vigo would return the favor soon though as what would have otherwise been a non event, Diego Alves decided to basically gift them a goal to make the match more interesting. I mean he was out of position, missed the ball completely and the goal was empty for Krohn-Dehli to score. Cissokho was also partially to blame as he was slow to close down, but this shouldn't have been a goal if Diego Alves reacted in the right way.

Anyways most of the battle from then on would be in the attacking third of both teams with Celta Vigo actually having the initiative since Valencia CF couldn't control the middle and allowed to be pressured deep in its own half. Luckilly the defense was quite solid and dealt with the attack quite well.

On the other side Jonas was quite inactive with having made barely any play and for the most part being anonymous. Soldado was the more active and was involved in the play often, having several runs, few shots on and off goal and providing few crosses and passes himself.

On the wings Feghuoli was more active than in previous match and Barragan gave him huge support, going forward on every occasion. Viera on the other side was also very dangerous with few piercing passes and some shots as well. Cissokho also doubled down on the left side nicely, providing few decent crosses and beating his marker numerous times. Cissokho would also score the winning goal for Valencia CF in the second half with a powerful header after a free kick by Tino Costa.

Jonas became more visible in the second half, linking up with Soldado and Viera few times, having even one decent chance on goal, but this wasn't his game and was rightfully replaced early by Valdez. Unfortunately Valdez didn't improve over Jonas and while he ran more than Jonas, he had some suspect moments on the ball.

Overall Celta Vigo did attack more and had more ball possession, but they didn't threaten Alves too seriously and apart from few quite dangerous shots that went off goal, Alves actually had very little to do.

Ultimately it was unconvincing play by Valencia CF with only parts of the team working at a given time and the team feeling like its in the early building stages, when it shouldn't feel like that because most of the players have been here for over a year. There were some positives in defense, but then again some negatives as well, some positives in attack, but also some negatives. For example Soldado was quite engaged and had several runs on goal, but he actually missed two decent chances and could have done better, in fact he should have scored at least once. Jonas was absent this time and barely touched the ball.

Player Ratings:
Diego 4.5 - At fault for the goal, apart from that didn't have much to do, but was reacted nice on few shots.
Barragan 6 - Bombarded forward at every possibility, albeit leaving his flank empty few times, though didn't have trouble dealing with Celta attackers.
Rami 6.5 - Assured performance at the center of defense, actually used his strength to throw few players out of play and generally stable performance.
Ruiz 6 - Assured performance as well, maybe half a point weaker than Rami, but did well and covered nicely few times for Cissokho.
Cissokho 7 - For the most part positive performance, could have reacted better closing down for the goal and was suspect once or twice more, but did have some great interventions as well.
Tino Costa 6 - Provided the assist for the Cissokho goal, some decent ball passing and closed down fast in the middle, but the lack of ball possession hurt him.
Parejo 4.5 - Did somewhat decent in a defensive fashion, but he also gave away the ball few too many times and did provide space for the Celta midfield to put pressure on goal.
Feghuoli 6.5 - Improved over the past matches, scored a goal and was more dangerous, but still lacks that penetrative ability.
Jonas 5.5 - Invisible for most of the match, improved a little in the second half and tried few passes and shots, but they were ineffective and substituted early for Valdez.
Viera 7 - I liked his performance, he provided the assist for the first goal, it was amazing pass to find Feghuoli alone on goal. He was consistently active and dangerous, going numerous times in the penalty area, having few shots and provided some good piercing passes. Went on occasions out of play and obviously needs more playing time if he is to improve and become even better.
Soldado 6.5 - Very dangerous, very active, had several runs on goal, few shoots and was involved in the build-up play and wing play often. Too bad he couldn't score a goal.
Subs:
Valdez 5.5 - Not an improvement over Jonas and lost few balls trying to dribble or pass, quite clumsy on the ball, though he ran more and even covered defensively.
Joao Pereira N/A - not enough time
Ricardo Costa N/A - not enough time