Well it was a classic in terms of history and tradition, Bayern Munich vs Valencia CF clashing for the first time since the Champions League final in 2000/01, that match finished in a 1–1 draw at regular time, but Bayern clinched their fourth title by winning 5–4 on penalties.


The match tonight wasn't as interesting or as prestigious as in the past several years Valencia CF hasn't really been a top contender, while Bayern Munich have won many titles and reached the Champions League final last season. The expectations was that Bayern Munich will win and I predicted a result of 2-0 for Bayern, though it ultimately finished 2-1 and Bayern had a chance to score a goal from penalty in the last minute of extra time, but Mandzukic shot was poor and Diego Alves was able to save the goal.

Anyways the match started as one would expect with Bayern Munich dominating possession and proceedings, while Valencia CF was sitting back and defending, trying to get something going on the counter attack. Even though Bayern would have huge possession and were constantly attacking, they didn't really have any real chances. There were some weak shots here and there and few tries with through balls, but Valencia's defense stood secure.

On the counter attack Valencia CF weren't any better than Bayern, as any ball that came to Feghuoli or Guardado or Jonas was a wasted ball as all of these were too slow, too clumsy and most of the time instantly lost the ball. The central midfield didn't help either with both Tino Costa and Daniel Parejo making silly mistakes and giving the ball away numerous times, not to mention their inability to control possession at all.

The first goal would happen in the 38th minute and just to ilustrate how bad some of the forward play was, it was because of Jonas who's first touch was like a small boy who started playing football for the first time. I mean it couldn't have been worse, he literally gave the ball away at least 10 meters backward going in the path of Bayern players and they didn't have too much trouble forming a quick counter attack and ultimately Schweinsteiger scoring from the created opportunity by Jonas. Diego Alves was also a bit at fault here, his positioning was very poor and it is very hard to score from such an angle, so if Alves was positioned better he could have saved that shot.

After the goal Bayern Munich got even better as some of the pressure fell of their shoulders and they would come to have few decent chances, most of which were ruined by Pizzaro. I mean he was unexpected starter and actually reacted really bad in the few situations and chances he found himself.

At the start of the second half Ribbery was out and in came Thomas Müller for Bayern, possibly an injury for Ribbery, though he was very ineffective against Joan Pereira and I wouldn't be surprised if he was subbed for his rather ineffective performance. 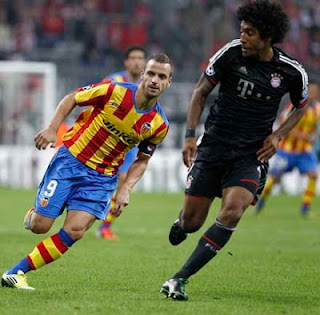 Anyways the second half started as the first with Bayern dominating proceedings and Valencia CF mostly content to sit back and defend, though we started seeing Bayern slow down little bit and Valencia CF started to get back some control. There were few chances for Valencia CF in this period as Feghuoli would have a very good chance, Cissokho did provide few decent crosses and there were some attacks coming from Valencia CF, but it would be for nothing as Feghuoli not to be outdone in being bad by Jonas provided Toni Kroos with a pass basically and this one scored to make it 2-0 for Bayern Munich.

Bayern would start slowing down the match from here on and this gave Valencia CF more freedom in the midfield and in attack, although neither the wings, nor the center were creating any serious chances or dangers in front of goal.

When all seemed to be over Valdez scored a goal, a great header on a great cross by Viera and this gave Valencia CF some small hope, but that will almost instantly diminish as Rami fouled Robben in the penalty area, earned his second yellow card and automatic red.

Mandzukic would step up to take the penalty, but his shot was rather poor and Diego Valdez was able to save the goal. And this is basically when the match ended and the result is rather decent, I mean away against Bayern Munich its only 2-1, but the result doesn't tell the whole story, truth is the play was really poor and we essentially couldn't really create any decent chance, apart from the one where Feghuoli found himself in front of goal, but his shot was blocked and went into corner and then the goal that Valdez scored.

Player Ratings:
Diego 6 - Mixed evening for Diego Alves. He was rather poor on crosses, in fact he is lucky he didn't concede a goal from such situations, could and should have done better for the first goal, had no chance for the second goal and did have few rather good saves, especially the penalty, even though the shot was poor, at least he guessed the side.
Pereira 6.5 - He had a very good match by my standards, didn't allow Ribbery to beat him and did well enough in attack the few times he went forward, more dangerous than Feghuoli.
Rami 4.5 - He had quite a good evening, in fact he made few interceptions and can't be blamed for any of the goals, but the red card and penalty he caused were bad and bring his score down.
R. Costa 7 - Very solid and secure, he defended great, stole several balls and made few tackles to stop Bayern attacks, not at fault for the goals as he was let down by basically the midfield and attack even.
Cissokho 6.5 - Very good game by Cissokho, solid at the back, barely allowed any space for Robben and Kroos and did help out immensely forward, providing few crosses, but lost his concentration towards the end and gave away few balls that could have resulted in goals.
Tino Costa 4 - Very poor game by Tino, lost the ball countless times and often in dangerous positions, his overall passing wasn't very accurate and while he did cover good at the back and run a lot, he failed to control possession and only had a small brake late in the second half when Bayern were 2-0 in the lead and started defending.
Parejo 4 - As Tino he too gave the ball too many times to even count, he couldn't string two passes together and his passing consisted of passing to Tino and back to the defense. Almost gave away a penalty as well, though at least he was decent in defense, but that is hardly an excuse.
Feghuoli 3.5 - Apart from one chance he had and failed to score from a rather good position he was useless and even enabled Bayern to score for a second time as he basically gave away the ball to Kroos who scored.
Jonas 4 - Invisible for the whole time, his only contribution was to Bayern for the first goal. Essentially he and Feghuoli defeated Valencia CF.
Guardado 5 - Invisible in attack, rushed one pass to R. Costa who was offside, when he could have shot or pass to someone else, but did really well in defense, he helped out Cissokho, but unfortunately that was his major contribution, helping out in defense.
Soldado 5.5 - Isolated for most of the match, lacked any service, though he was helping out in defense, won some challenges and fouls to give Valencia CF some position and was fairly dangerous for the lack of service.
Subs:
Valdez 6.5 - Ran like hell after coming on, didn't stop running and was trying to get involved in everything and it payed off as he scored a goal with a header on an assist by Viera.
Viera 6 - Didn't have much time and didn't get much ball time, but class with every move and showed his class by providing a great assist for Valdez.
Barragan N/A - not enough time
Posted by SlickR at 11:31 PM
Email ThisBlogThis!Share to TwitterShare to FacebookShare to Pinterest
Labels: match report
Newer Post Older Post Home