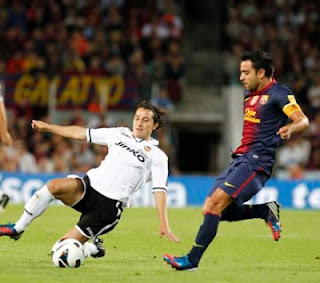 Another classic ends and what can I say, I expected us to loose, maybe not with that results, but I knew that without a strong midfield we'll get overrun and barely be able to mount a counter attack or create a decent build-up play to threaten Barcelona seriously and I was right.

Barcelona dominated for most of the match, had several chances and managed to score one goal. Valencia CF on the other hand had few chances as well, but nothing really serious, except maybe at the end the Ruiz header.

The match started with Barcelona in complete control and Valencia CF willing to sit back and defend and possibly do the damage on the counter attack. Barcelona were probing and playing the channels, but it was Valencia CF and Roberto Soldado that would have the first big chance with Soldado one on one against Pique I think, placing a good shot that forced Valdez to react, but went just wide. 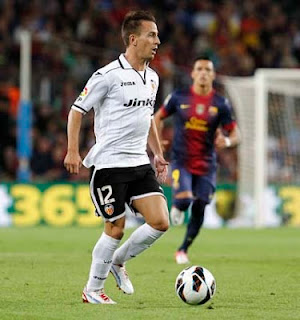 Barcelona would continue attacking and pressuring until it finally payed off it the 22nd minute of the match. Adriano got the ball on the right hand side, he was unmarked and with a powerful long range shot scored a goal. Diego Alves could do nothing as the shot was perfect, probably goal of the week in Spain.

Few minutes later mistake by David Albelda would give the ball away to Messi, who plays on Fabregas who is unmarked and has clear sight of goal, but his shoot was very poor and shoots wide.

30th minute Alves would get a chance from the left, going through alone on goal, but his shot goes wide as well.

Valencia CF finally wins a foul in the middle of the park, Tino Costa takes the free kick and the ball finds Feghuoli who shoots, but his shot is miserable and flies way above the goal.

44th minute another chance for Valencia CF after Joao Pereira steals the ball from Dani Alves at the back, he quickly passes to Jonas, he shoots, but his shot is way off. Really poor shooting by Jonas, it could have been a goal if he was accurate. 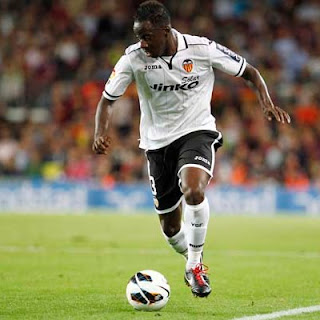 The first half would end with Barcelona attacking of course, with actually a corner kick for Barcelona, but the referee whistles for the end.

Second half starts in the same fashion as the first with Barcelona continuing their attacks and in the 54rd minute Alexis Sanchez provides a great pass to Fabregas, this one has time and space to shoot and score, but his shot is once more really bad and shoots above the goal. This match was really market by poor shooting on both sides.

Then in the 60th minute another controversial decision by the referees going in the favor of who else if not Barcelona. They had a controversial decision in their match against Osasuna, now again against Valencia CF, this is of course after the crazy decision that went towards Real Madrid ruling Soldado offside. This one was pretty much the same as this time its Ruiz goal that is deemed offside, even though he appeared to be in line.

After that there was few more controversial decisions, some smaller like neglecting to whistle foul on Valencia CF players and protecting Barcelona players. I would say this refereeing must stop, I mean there needs to be major investigation about some of this stuff.

But anyways Valencia CF improved a little bit with the arrival of Fernando Gago and Viera for Albelda and Guardado respectively. We gained more possession and were able to have few decent build-up plays, but intimately it would be too little, too late.

Victor Ruiz actually almost scored just in the end after a corner kick, his header was really close, but still above the goal and that was the end of the match.

I could stop there as those were pretty much most of the major happenings in the match, but I got to continue and say that we are now three matches and no wins, in fact we have 2 draws and 1 loss, which even though we passed two of the major obstacles this season and on their terrain, it still goes into the heads of people and will create pressure on the team, make no mistake about that.

The important thing right now is to analyze the match, improve on the mistakes, with the return of Gago we are going to have a stronger and more stable midfield so that is very important, but there are some worries.

For example our defense is still fragile, I get the sense that anytime they are going to break and allow the goals, Barcelona certainly penetrated our defense and only poor shooting on their behalf saved us from a bigger loss, so there are cracks, there are frailties and that needs to be improved. The wings this season were supposed to be better and faster, but has so far not been the case. In fact as I've mentioned in my last match report Guardado seems really out of sorts. I don't know if its just because his start was a very difficult one going against Real Madrid, then his former team who he just left, then against Barcelona, but he hasn't been the player we all expected him to be.

Now that said he needs more time to gel and get to know his fellow players, but I think Pellegrino may have put him on the field way too soon. Maybe he should have sat him back and played Viera or Piatti more and then slowly build him into the team.

Valencia CF other wing is rather weak as well, Feghuoli hasn't shown anything this season and I would say he is one level weaker than last season. He also seems tired all the time, last season he was one of the biggest runners and this season that is not the case at all. He has also been unable to pass defenses or create any chances.

So we need to keep in mind these things and even though its very early and the schedule was such that we couldn't have done much better, there needs to be some action to address some of these issues if we are not to be caught with our pants down.


Player Ratings:
Diego 6 - Had one good save and several smaller saves, did well and nothing he could do about the goal.
Pereira 5.5 - Did decent in attack, he should have pressured Adriano more so he couldn't shoot, was beaten few times with no consequences. Did really great going forward, caused trouble all the time and was his saving grace.
Rami 6 - Did well enough and made few tackles, but for all his strength he goes down to Messi. He really needs to start using his strength and bounce opponents.
Ruiz 6 - Made few interceptions and tackles, was dangerous going forward on corner kicks and almost scored a goal in the end. Improved performance over his last two.
Cissokho 5.5 - Beaten two or three times and he lack burst of speed to close down opponents, but his positioning seemed great even though its his first match for Valencia CF. Really good going forward and caused trouble on his few runs.
Albelda 6 - He covers really well and doesn't show age. Really closed down Barcelona and what was up to him shut down Barcelona. His weakness is when he goes forward, he just doesn't know how to play forward.
Tino Costa 6 - Some great small plays and runs, did really well in defense as well, but couldn't get things going in midfield and Valencia CF had no possession.
Feghuoli 4.5 - Really out of sorts. He was very slow on the wing, slowing down the actions and didn't really threaten once.
Jonas 5.5 - Was the main threat and when Valencia CF had the ball he instigated most of the actions and plays, but he just didn't have enough space to do something.
Guardado 5 - Helped out in defense immensely and doubled down the left side, but couldn't do anything in attack. He had some space and time to try something, but decided to just return the ball backward.
Soldado 6 - Dangerous and active, he had few good runs and some nice link-up play with Jonas, but just didn't have the service to make a difference.
Subs:
Viera N/A - Didn't have enough time to change anything.
Gago N/A - Not enough time, though he did improve our ball possession.
Valdez N/A - Not enough time.
Posted by SlickR at 9:54 AM
Email ThisBlogThis!Share to TwitterShare to FacebookShare to Pinterest
Labels: match report
Newer Post Older Post Home