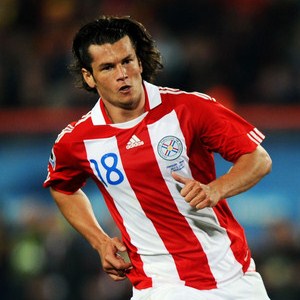 Nelson Haedo Valdez finally joins Valencia CF on a one year loan deal, after a lot of speculation around him. Valencia CF has a 2.5 million dollars purchase option at the end of the loan deal, though it is likely Valencia CF won't use the option unless Valdez by the luck of the straw has a really breakout season and does amazing.

Nelson Valdez joins Valencia CF from the Russian team Rubin Kazan who Valdez joined in 2011 and only scored 4 goals for them. He's also played for Paraguay 59 times and scored 12 goals. Overall he is not a great goalscorer and is not the tall type player either, so its not exactly what Valencia CF coach Mauricio Pellegrino wanted, but he will have to do.

We've also been linked with Nelson Valdez before, in fact 2 years ago and then 1 year ago, so I guess Braulio got his long time wish to bring him to Valencia CF.

The fact that he comes on a loan deal makes this move bearable and Valencia CF now has around 7 million euros to spend on a left back and it looks like its going to be Aly Cissokho from Lyon.
Posted by SlickR at 10:18 PM
Email ThisBlogThis!Share to TwitterShare to FacebookShare to Pinterest
Labels: news, official transfers
Newer Post Older Post Home