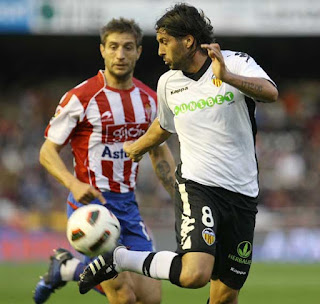 Chori Domizguez is likely to continue his career in Rayo Vallecano after reaching personal agreement with them and is now negotiating the rescind of his contract, which Valencia CF want to be able not to pay damages to Chori, and he's likely to back down from his request of damages, since he knows there is no alternative than to basically stay at Valencia CF and not play or train with the rest of the team and waste one year.

Chori Dominguez had really bad relationship with Unai Emery and had some bad moments, but most importantly influenced Ever Banega in a bad way and was loaned out to River Plate, since the load ended and coming to Valencia CF he had an intent of getting on the good side of Pellegrino, but after a meeting Braulio and Pellegrino had it was decided he'd be a bad influence on the team and he was shut out of the team and allowed to train by himself.

But on to another topic I've set up a custom league at the Premier League fantasy league. Last year we had about 20 people join up, so I expect us to at least equal the numbers, certainly from the Euro 2012 custom league I set up we had I believe around 35 people join so I'm hoping to have at least 20 people join my new custom league. Please join and tell your friends, family co-workers and everyone you know to join. All you need to do is basically click the following link and you'll be automatically joined to my custom league. http://fantasy.premierleague.com/my-leagues/170044/join/?autojoin-code=671528-170044
Posted by SlickR at 12:02 PM
Email ThisBlogThis!Share to TwitterShare to FacebookShare to Pinterest
Labels: news, transfer speculations
Newer Post Older Post Home