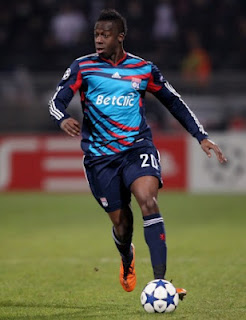 New Valencia CF signing Aly Cissokho arrived in Valencia this morning by plane, met with the usual Valencia CF staff and did the medical exam which he passed with flying colors.

Aly Cissokho will be presented as new Valencia CF player this evening at 18:00O'clock.

For those that don't know Aly Cissokho was a Lyon player, he arrived to Lyon from Porto and soon established himself as the main player on the left back position, playing over 90 matches in 3 years just in the French league. Overall he's played over 110 matches total, including over 20 matches in the Champions League.

He is also still young, only 24 years old and comes at the perfect time to Valencia CF, I believe he has yet to reach his full potential and in many ways is better than Jordi Alba. He is certainly stronger, more physical and more defense minded than Alba.
Posted by SlickR at 4:19 PM
Email ThisBlogThis!Share to TwitterShare to FacebookShare to Pinterest
Labels: news
Newer Post Older Post Home