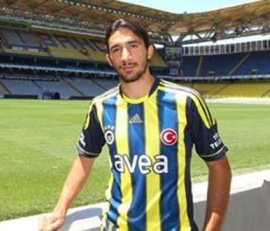 Fenerbahce confirmed on their official website the transfer of Mehmet Topal from Valencia CF to Fenerbahce.

The reported transfer fee is 4.5 million euros, which is at least half million less what Valencia CF demanded and I believe full 1.5 million less of what I wrote Mehmet Topal was worth.

The midfielder nicknamed the 'Spider' has signed a 4 year contract with the Istanbul giants. Topal will receive €2 million per season and a €10,000 bonus per appearance.
Posted by SlickR at 6:45 PM
Email ThisBlogThis!Share to TwitterShare to FacebookShare to Pinterest
Labels: news, official transfers
Newer Post Older Post Home