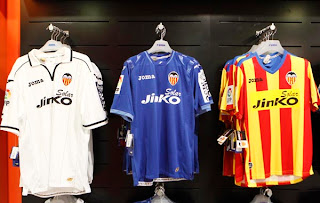 Okay so I haven't been posting the news lately, so I'm going to give you a big news dump in this one post.

Valencia CF renewed the contract with Carles Gil, Valencia CF B team player and he has the option to join in the first team, Pellegrino will probably give him a chance to prove himself.

Jonathan Viera was officially presented as a new Valencia CF player. He was very excited to join Valencia CF and said he'd work hard and fight for a place in the starting eleven team.

Joma and Valencia CF unveiled the rest of the dresses, with a blue away shirt and the popular yellow and red shirt as a third kit.

Bruno Soriano's agent went to Valencia CF and reports have it he met with Valencia CF staff to negotiate the transfer of Bruno Soriano, who is Valencia's first target since Mehmet Topal's transfer to Fenerbahce. Even new coach Mauricio has called for the arrival of Bruno Soriano and it seems like Valencia CF will officially mount a move to get him.

Mauricio Pellegrino's favorite player to replace Jordi Alba is Guilherme Siqueira and Valencia CF has mounted a move to sign the player, who now playes for Granada, but its said to cost as much as 8 million euros, which is way overpriced for his quality and especially for the economic situation.

Didac Villa is still an option, but Milan won't release him on loan and would only sell for 6 million euros, which would actually cost less than Siqueira, so no logic in going after Siqueira, but maybe Braulio knows something we don't, so we'll see.

Tino Costa will likely not leave after all, especially after the meeting he had with Pellegrino and the coach reassured him, he is an important player for the club. That said Unai Emery with his new team Spartak Moscow is interested in acquiring Tino Costa and reports have it they've launched a 8 million bid for the player.

The club unveiled the 10 objectives for next season and its the standard ones, that we've had for at lest the past 3 years. Its basically keep third place, try to get closer to Barcelona and Real Madrid, go as far as you can in the European competitions, improve the defense, play better, etc... I mean pretty standard stuff.

As of today the new training season is underway and most of the team will be present at the training, with few players getting extended vacations as a reward for playing qualification matches or in Euro 2012.
The players on the first training are: Diego Alves, Vicente Guaita, Albelda, Jonas, Roberto Soldado, Barragán, Pablo Piatti, Víctor Ruiz, Pablo Hernández, Parejo, Jeremy Mathieu, Tino Costa and Viera, with Banega and Canales set to contineu their recovery with some light exercises.

The team will train every day at 8:00 O'clock till they move to Germany and continue the preparations there.

It seems as our target Kevin Gameiro has injured himself in the first training for PSG and initial reports say its a bad injury that will keep him out of training for at least 2 weeks.

Valencia CF is now looking at PSV's Strootman as a cheaper option than Bruno, but its actually a question if this guy is cheaper as PSV were asking 15 million euros for him last season.

So there you have it most of the news in one post and hopefully I can post more frequently, although I doubt it, at least until the preparation matches start and I almost always follow those if there is transmission of them.
Posted by SlickR at 4:55 AM
Email ThisBlogThis!Share to TwitterShare to FacebookShare to Pinterest
Labels: news
Newer Post Older Post Home