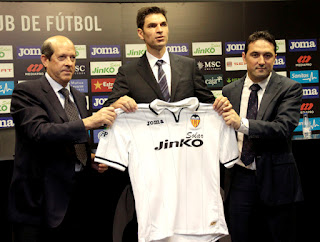 Mauricio Pellegrino was officially presented as Valencia CF new coach today and he will lead the club the next two years.

He explained some things about the potential transfers of some players and said that he would love Alba to stay as he considers his one of the best in the world, but said they have replacements if he left. He also mentioned Tino Costa and said he hasn't spoken personally, but thinks he is a great player.

He reaffirmed that those who leave will have worthy replacements and that the club is working on some additional reinforcements.

He said that he wasn't the team to be attacking, but that he will work on defense as well as he was a defender himself and would like Valencia CF to have the best defense. (Thank god) Finally!!!

He said that now he wanted to begin work immediately and assemble a team around him. He said he had the support of the fans and staff and with their help would like to bring Valencia CF to the next level.