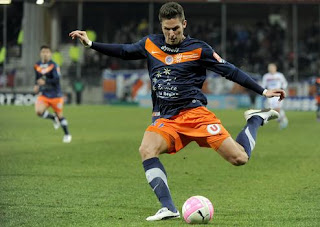 Valencia CF is interested in Montepellier attacker Oliver Giroud who is one of the top scorers in the French league with 19 goals scored, but who also has 8 assists and is considered an overall great player who can score and create opportunities.

Valencia CF plans to sign a new striker in the summer, as its likely that Aritz Aduriz will leave as he has not shown the kind of games that the club officials expected and in down is scoring as well.
Oliver Giroud is 1.92 meters and is considered the perfect replacement as he is good in the air, but possesses good technical ability as well.

Valencia CF is said to be prepared to offer up to 10 million euros for the player and not a penny more, while also having good alternatives if they fail to reach an agreement with Montepiller for the price of the player.
Posted by SlickR at 3:28 PM
Email ThisBlogThis!Share to TwitterShare to FacebookShare to Pinterest
Labels: transfer speculations
Newer Post Older Post Home