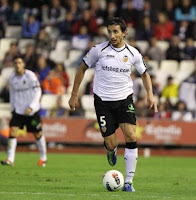 Turkish media report that Valencia CF has accepted the 8 million offer by Fenerbahce for Mehmet Topal. But reports could actually be wrong as the Fenerbahce president wasn't clear with his words and it could actually mean that they signed Tino Costa which would be more logical as Tino Costa wanted to leave and Valencia CF sporting director Braulio Vazquez said they would listen to offers for him.

So to me it seems that Fenerbahce have probably signed Tino Costa, and not Mehmet Topal as that would leave us with only one defensive midfielder in Albelda who is in the retiring years now and Maudro is not likely to sign a contract extension, so it makes no sense to tell Topal, unless they plan to bring in Bruno Soriano which as I've written previously is a possibility.
Posted by SlickR at 9:03 AM
Email ThisBlogThis!Share to TwitterShare to FacebookShare to Pinterest
Labels: news, transfer speculations
Newer Post Older Post Home