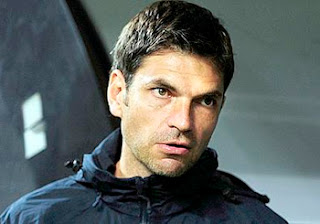 Former Valencia CF player Mauricio Pellegrino will be Valencia CF new coach, according to few Spanish websites. Now while this isn't official, its very likely this is the case.

Pellegrino played for Valencia CF from 1999 to 2005, being in the team that reached two Champions League finals and of course from year 2000 pairing Ayala as the back and winning two Spanish League titles.

He had a short stint at Liverpool, but it didn't turn out well and he ended his career one year later at Alaves.

He has worked as a coach since 2007 coaching one of Valencia's youth teams, and then in 2008 joining Rafael Benitez as assistant at Liverpool and then Inter.
Posted by SlickR at 6:28 PM
Email ThisBlogThis!Share to TwitterShare to FacebookShare to Pinterest
Labels: news
Newer Post Older Post Home