Sergio Canales out for 6 months again 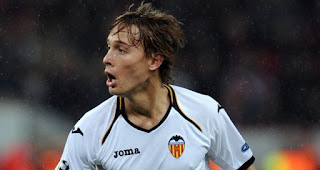 Today was confirmed that Sergio Canales has renewed his previous injury on his knee caps and his season is over, basically just two weeks after it started. He is going to be out for another 6 months and very few players fully recover after such injury twice.

We can safely say that even if he was to recover its suspect if he is going to be the same player after that and its a shame as he is a very talented player and could have helped Valencia.
Posted by SlickR at 12:31 PM
Email ThisBlogThis!Share to TwitterShare to FacebookShare to Pinterest
Labels: news
Newer Post Older Post Home