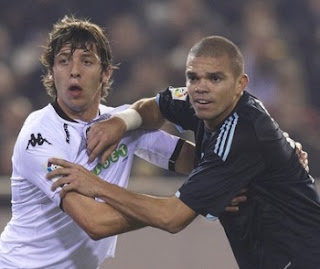 Angel Dealbert has been offered a contract extension by Valencia CF and only the details are left up to negotiation, but he is right now considering offers from other clubs and has said he'll make his decision closer to the end of the season.

Dealbert has not featured too much for Valencia CF this season, as Rami and Ruiz have been the standard duo. The times when he played he actually did a great job and was very reliable. Dealbert is also one of the least paid players at Valencia CF which is another reason the club wants to keep him.

Teams like Levante, Espanyol, Bilbao and few others are interested in the player and would like to get him in their ranks and the price of 2 million euros is affordable to most of these teams.
Posted by SlickR at 5:22 AM
Email ThisBlogThis!Share to TwitterShare to FacebookShare to Pinterest
Labels: news, transfer speculations
Newer Post Older Post Home