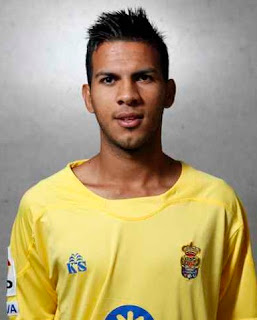 Valencia CF technical director Braulio Vazquez admits interest in Jonathan Viera, Las Palmas striker. Speaking to the newspaper La Provincia he said that Valencia CF is interested in Viera and that Valencia CF has been following him and analyzing his play and he likes what he's seen. He announced to make a move in the summer to try and sign him.

With a clause of six million euros, the fact is that Viera contract with the Las Palmas ends in June 2013 so they are going to be forced to sell the player, as the player has announced he wants to move.

Report have it that Jonathan Viera has reached a verbal agreement with Valencia, so its likely in that circumstance Valencia CF to be able to sign him in the summer without too much trouble from other teams like Atletico Madrid, Napoli and Malaga.
Posted by SlickR at 6:27 AM
Email ThisBlogThis!Share to TwitterShare to FacebookShare to Pinterest
Labels: news
Newer Post Older Post Home