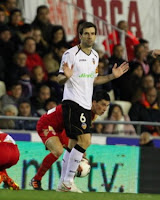 David Albelda extended his contract just before the match with Stoke City and will stay at Valencia CF for one more year. Albelda has been very consistent this year and overtook Topal as a starter in the team and thus earned himself  a new contract.

He is also Valencia's captain and oldest member of the club and most standing, having played at Valencia for 15 years.

Valencia CF president Manuel Llorente said that the team needs Albelda as he brings so much to the team and more recently he's said that they are going to extend the contract with Jeremy Mathieu very soon and how they have an agreement with Mathieu. He also said Jordi Alba is also likely to extend his contract with Valencia.
Posted by SlickR at 11:27 AM
Email ThisBlogThis!Share to TwitterShare to FacebookShare to Pinterest
Labels: news
Newer Post Older Post Home