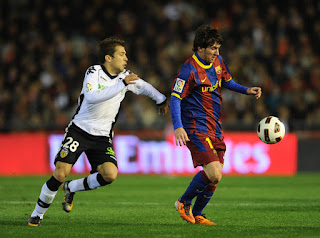 Ever since Jordi Alba got into the Spanish national team Barcelona has stepped up their interest in Valencia's left back Jordi Alba, even though they've denied any serious interest.

Jordi Alba also spoke some time ago how he feels great in Valencia and that he would like to continue his career in Valencia CF. But his representatives seem to telling us something different as they've been seen talking to Barcelona representatives about a potential transfer.

Jordi Alba as I've written yesterday is valued at 10 million market value, though I'm pretty sure Valencia will want more, though I believe his transfer fee isn't much higher than 10 millions and if Barcelona pushed they can easily take Alba, assuming he wants to leave, which I have no doubt that he would love to move to Barcelona.
Posted by SlickR at 1:25 PM
Email ThisBlogThis!Share to TwitterShare to FacebookShare to Pinterest
Labels: news, transfer speculations
Newer Post Older Post Home