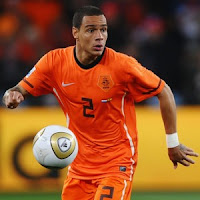 Ajax's right back Van der Wiel has confirmed to the Dutch media that he has reached an agreement with Valencia CF and that the deal will have him stay at Valencia CF until 2017, of course if negotiations go smoothly between the two clubs.

If the deal goes through Van der Wiel will stay at Ajax until the end of the current season, in a similar fashion to the deal Valencia made with Lille over Adil Rami.

So far the sides haven't reached an agreement over the transfer fee with Valencia offering 6 million and Ajax wanting 10 million, though sources have it that is deal could be reached for 7 million euros.
Posted by SlickR at 11:22 AM
Email ThisBlogThis!Share to TwitterShare to FacebookShare to Pinterest
Labels: news
Newer Post Older Post Home