Hey guys, I was planning on posting a match report and player ratings for the Granada match, but I got caught up with something and Valencia CF won so a tactical analysis is not worth it, play by play I forgot most of the stuff that happened so I decided best thing in not to write anything.

Anyways I'll be hopefully doing some interviews in the very near future with few persons from other blogs or websites about different teams so stay tuned for that, its going to be really interesting. 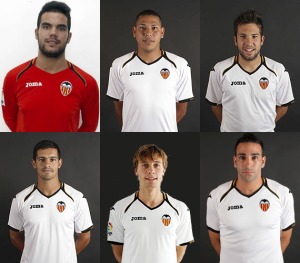 But anyways here are the players that received a call for their country:
Jordi Alba got a call up to the Spanish national team for the first time ever and this is a great opportunity for him and hopefully he grabs this chance and goes with it.

Hedwiges Maduro got a call to the Holland national team even though he hasn't played too much for Valencia CF and said that he might leave to get more playing time. Of course since then Emery has given him a little bit more playing time, certainly more than Tino Costa gets right now.

Ricardo Costa also got a call for his Portugal national team and is likely very happy, since he has only played 45 minutes so far for Valencia CF.

Sergio Canales also got a call for the Spanish under 21 team and this was to be expected, its just a continuation for him. Canales has so far played quite well for Valencia CF, with the last match being probably his best in a Valencia shirt.

Our new B team goalkeeper Cristiano Pereira got a call for the Portugal under 21 team, but he hasn't really impressed in the B team and apart from one really poor match he hasn't features as far as I know in the Mestalla first 11 team.

Last but not least Adil Rami has been called for the France national team. Adil Rami has been regular for the French national team and apart from not being called two times where Blanc was testing out different players he has been a regular.
Posted by SlickR at 7:31 AM
Email ThisBlogThis!Share to TwitterShare to FacebookShare to Pinterest
Labels: news
Newer Post Older Post Home