Valencia CF lost its first match this season at the legs of Sevilla FC. And it wasn't just the loss that is bad, but it was how Valencia CF played in the first half.

This formation has never worked for Valencia CF in any shape or form, and having some weird transformations in it as well didn't help one bit either and it just made it more confusing to the players. But I know what Emery was thinking and why he set up the formation as he did.
He was planing on playing Maduro so back that in a way it would be only Tino and Banega in the middle with Mathieu and Bruno standing in the middle as playing as wingers and have Jonas come in deep whenever possible when attacking.

Here is an illustration: 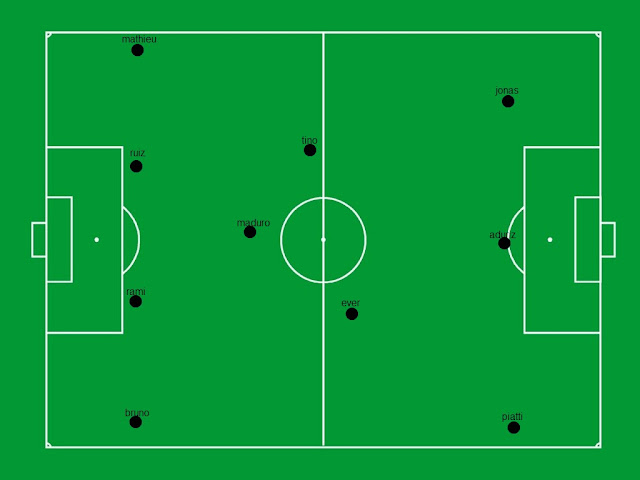 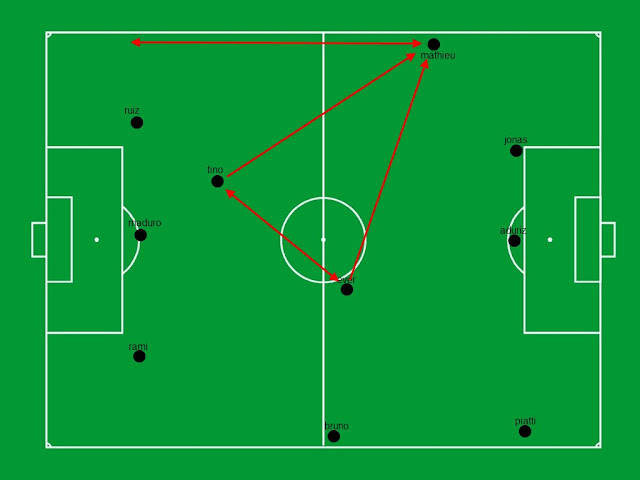 The first image is the starting formation, but that formation was fully transformed when defending and attacking. For example when transforming to attack the formation changes to what it is in the second position.  As you can see from red arrows the distance from Tino to Banega was huge and not to mention the distance from Tino to Mathieu or Bruno so most of the time the ball ended up circling in the defense for too long until Rami crossed forward or until Bruno came back and got the ball. As it was, Banega did not come back and with Tino unable to bring the ball forward Valencia was forced to play with long crosses that ended up just giving the ball to Sevilla.

In the situations when we did manage some try at an attack our left side was fully exposed. As you can see from the second picture the red arrow from Matheu and the back. Our whole left side was exposed and as we saw Jesus Navasu used this space to get a counter attack and pass the ball to Kanoute who had ample time to slot the ball into the net.

But that wasn't Valencia's only problem. Since Emery wanted the full backs to play as wingers this also left our right side exposed since Bruno was way too slow to came back from attack and his attacking contribution wasn't something to talk about either.

Ultimately it was Emery's fault for the formation and tactical setup and only did he fix it at the start of the second half. 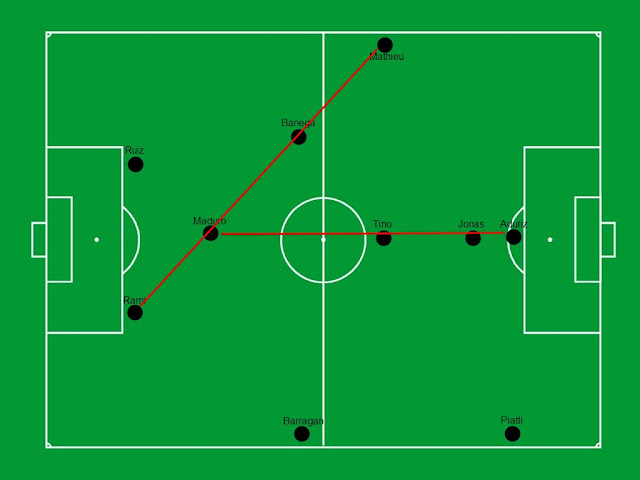 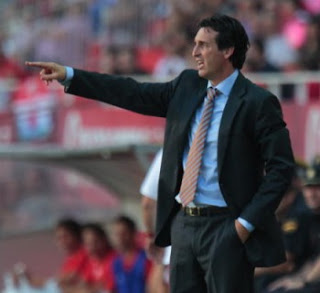 Anyone noticing any difference? As you can see Emery made some good changed in the second half, that he should have probably started with. As you can see from the above picture Ever Banega and Tino Costa changed places. Why was that you ask? Well its because this way Valencia CF had someone (Banega) who can actually bring the ball out of defense and transfer it in attack. This could have possibly left us more vulnerable in attack and I suspect this is why Emery didn't start this way, but Banega and Maduro were able to cope good in defense and Tino Costa dropped deep anyways since once we controlled the ball there was time for Banega to move forward still on the left side and Tino Costa to come backward, still on the right side.

The other change was Mathieu  came a little bit more back and this created the perfect passing opportunities for Banega who could play to Mathieu on the wing, Maduro back if under pressure or forward to Tino Costa.  It also created a natural progression for the ball to be passed.

Third change was the arrival of Barragan in the place of Bruno and this had basically one effect and that is to add some speed on the right wing. It made the right wing more safe defensively and more dangerous offensively. 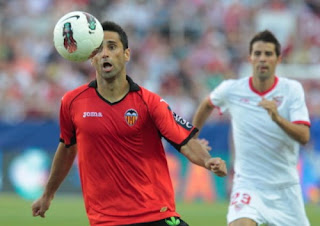 Fourth change was the position of Jonas. As you remember in the first half he barely touched the ball and was nowhere to be seen and this is because he can't play as a left winger. He is either a striker, support striker or an attacking midfielder. Emery decided to put him just behind Aduriz, but give him the freedom to roam and this paid off as Jonas linked up quite well with many of the players after this change and we can see him doubling on the right a lot of times or coming in the center straight towards goal and he had quite a few shots and passes with his new position and given freedom.

The biggest mistake Emery did in this match looking from retrospective is the substitution of Piatti for Canales.
With the four changes Emery made we were basically stranded with only one attacker as Jonas was positioned as an attacking midfielder. 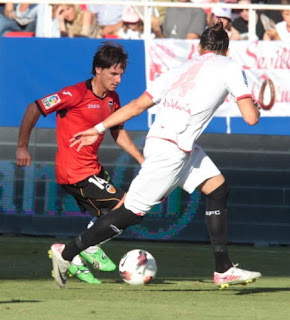 At this point Sevilla were with two players down and I guess he wanted to add some more precision passes from the right into the penalty area and with Piatti missing 20 passes it wasn't going to happen by him. The problem was that our midfield at that point became too crowded and with Canales playing more in the middle than right it sort of strangled our own attack and decreased the effectivness of Jonas.
Mathieu was also tiering as always around the 70th minute mark and instead of Canales, it would have made perfect sense to Bring on Feghuoli for Tino Costa who wasn't really needed at that point and all he did was provide short passes to Banega and nothing else.
Replacing Tino with Feghuoli would have put Piatti on the left side and he would have helped out Mathieu, Feghuoli would have slotted on the right and added more depth to the right wing and later on Emery could have brought on Soldado for Ruiz.

As it is this loss was not Emery's fault per say, as Banega missed a penalty, Aduriz got himself send off by falling for Navarro's provocation and basically gave Sevilla a lifeline.

Ultimately it was a combination of things that resulted in Valencia CF loosing, from the bad formation, the unknown 3 defense system that caused Rami and Ruiz problems to Banega missing a penalty, Aduriz getting send off and generally the weaker play by all the players in the first half.
Posted by SlickR at 11:51 PM
Email ThisBlogThis!Share to TwitterShare to FacebookShare to Pinterest
Labels: match report
Newer Post Older Post Home